It is interesting how all bullies are, underneath everything, cowards. And tycoon Philip Green, recently fallen from grace, who loves to be in the hot seat where everyone bows down to him because of his money and where he is always in a position where he can control and push people around, may have realised that yesterday when he was in another kind of hot seat, a rather less comfortable one. He was being questioned by a parliamentary committee over the shortfall of cash in the BHS pension fund which he’d owned for 15 years, then selling it to a known bankrupt as a result of which BHS has collapsed with thousands of people being made redundant. 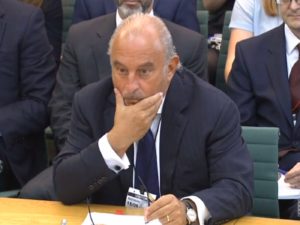 Philip Green at the Commons Inquiry

And he didn’t like it one bit. One saw the insecurity and paranoia on his face. I was prepared to give him the benefit of the doubt if he’d shown a bit of heart and admitted he’d put a lot of people in a precarious position. But not a bit of it. No remorse at all. You could see his fragile ego was fighting for its life. He wasn’t so much concerned about the pensioners who’d lost their pensions but with the loss of his self-image and becoming the latest ‘unacceptable face of capitalism’.

In his mind, everything was everyone else’s fault and poor little ‘Sir’ Philip was the victim now of everyone getting at him. Boo hoo. ( I asked myself what kind of inferiority complex required someone to have not one, but three super yachts!) and I thought it sad that our system not only hands out honours to damaged and insecure little schoolboys like him who need big toys to play with.

Why do we give honours to people who are not honourable? He fits the typical insecure psychological profile of many men who are driven by money, fame and power: inside they feel small and are terrified of being controlled and not feeling powerful . Did mummy smack him a lot as a little boy for being bad and wee-ing in his bed, I wonder!

But I also look at the part of me judging him. Who am I to do so? What do I get from it? I think we all like scapegoats to project our shadow side on so maybe we don’t have to see a Sir Philip Green archetype inside us. What would I do – what would we all do – if we had his billions?

Here’s my fantasy: that he learns from his mistake. He changes and puts the full amount back into the Pension fund that got removed and has a St Paul on the road to Damascus conversion, and suddenly sees himself for who he really is – the good, kind, generous man hidden underneath all that surface froth – and he devotes the rest of his life donating his money to good causes and using his considerable business expertise to make a difference in all the many ways he is capable of it. And yes, keep one yacht. I think if you really enjoy it , dude, you won’t need two more. I wish you well.

The Oxford Dictionary defines liberation as: ‘the act of setting END_OF_DOCUMENT_TOKEN_TO_BE_REPLACED