In a lecture I gave recently, someone asked me this question:

“Serge. Could you give me any advice as to how one may best let go? I am making some new year resolutions for myself and I realize that in order to carry them out effectively, there are some things I need to surrender and I am finding this process quite difficult.”

Here was my reply: 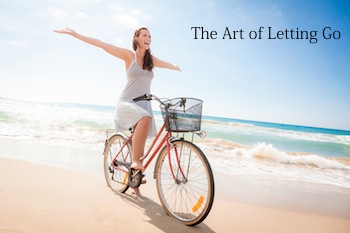 It is much harder to let go of things – be they possessions, people, values, beliefs, habit patterns – than to take them on, as that first process often happens spontaneously without our even being aware of it.

A relationship, for example, is always much easier to get into than to get out of, but as you say, often we cannot move on to the next phase in our lives unless we start divesting ourselves of what it is inside us that stands in its way.

If we have a New Years resolution about wanting to earn more money, and we are still clinging on to a belief that tells us that we don’t deserve abundance or that having money is somehow ‘bad’ or it will ‘lead us astray’,  the chances are that we  probably won’t make much headway with our new intentions until these negative beliefs have been released from our system.

Perhaps, if all of us lived truly organic lives, where we were beautifully in touch with our own nature and the  nature around us, the letting go of certain emotional and mental identifications, might well happen more naturally.  Certainly, this is what generally occurs for us physically, where, every morning, hopefully what our bodies don’t need, is passed out of our systems without our needing to think about it. The problem, however, is  that the process of emotional and mental eliminating is much  more complex  and does not happen  so naturally, the result being that many of us are very emotionally and  mentally ‘bunged up’.

I just read a story about an eminent professor of philosophy going to see a famous Zen master to learn from him, and when the master saw him,  he  simply got a dish and a large jug of water and poured it slowly into it until it began spilling over. Seeing the professor’s  baffled expression, the master told him that this symbolized  his having a head that was so full that there was no room  for him to learn anything else. ‘Go empty yourself  first and then come back and see me’, was the guru’s message.

However, this is easier said than done, as most of us have lived with certain beliefs, ideas, values and habits for so long, that they have slowly etched themselves  into our psyches resulting in our becoming extremely identified with them.( A Nobel prize winner once said that ‘Science advances through the death of those who oppose new theories!’)  The point is that by nature, we tend to be very, very clenched. Indeed, the more we are identified with our egos, the more inclined we are to want to ‘hold on’. In much the same way that we tend to avoid the idea of  confronting death , so this also applies to  the process of letting go, which in one way is a form of dying!

OK,, so what do we do if we want to let go? There are a few things.

If what we want to let go of is very buried, for example, a fear around being abundant or a sense of being undeserving, we may need outside therapeutic support  to help us uncover why we are holding onto that  particular pattern, for it is hard to let something go unless we understand exactly what it is and where it comes from. If we are trying to surrender a particular addiction – much stronger than simply an attachment – then we will certainly need a lot of outside support, such as that provided by an organization like Alcoholics Anonymous.

We need to recognize that the more we want our lives to change, the more likely it is that resistance will come up for us ( a fear of wholeness existing to a greater or a larger extent inside all of us), and this resistance  cannot be ignored. It must be confronted and worked with. We may think, for example, that it is easy to let go our suffering –  after all, no one wants to suffer! It is surprising, however, how deeply etched it can be in some of our identities. Who would we be without this familiar companion? Better a devil one knows than one you don’t!

If one has a strong intention to let something go, then creating a ritual to enable one to do so, can be powerful. In my New Year retreats, I always have a fire ritual where people prepare a ‘bundle’ full of symbolic embodiments of what they want releasing ( e.g.,  dead wood for a dead end job,  ivy for an old clingy relationship) and they throw it on the fire and imagine the old pattern gradually burn away opening up space for something new to come in its place. I always advise people not to try to let go too much but simply to focus on what they think they are capable of at the time.

One of the most powerful ways to let go is to go on a fast which is not merely physical but also metaphysical, that is, to go to some wilderness place with nothing to distract one but a notebook and pen – no food, no people, no internet – and just ‘be’. While this may be challenging, especially if we are someone very used to having ‘stuff’ around us to  bombard our senses all the time – sweet food, activities, television, the internet, etc – a natural ‘fasting of the heart’ occurs when these things are absent.

If we  go on  a spiritual retreat, a natural letting go  will also occur. Here,  what is  of huge help is engaging in  prayer and meditation as these activities take us to the deeper echelons of our being and  thus enable us to be temporarily dis-identified from the more superficial layers of our psyche which  store much of  the material we may be wanting to release. The more we connect into our inner silence, the easier it becomes to let go all the ‘noise’  and pollution of  the busy world around us which  has gradually built up inside us over the years.

Sometimes letting go  may require that we learn to forgive someone for something we feel they did that hurt us. This process is complex and can seldom occur overnight and must be engaged in step by step. In my recent book ‘Awakening the Universal heart: a guide to Spiritual Activism’, I have chapters exploring prayer, meditation and forgiveness which are all very relevant.